Activities to do, and circuits and places of interest to visit in Cruz Chica, La Cumbre and surroundings

Activities to do, and circuits and places of interest to visit in Cruz Chica, La Cumbre and surroundings 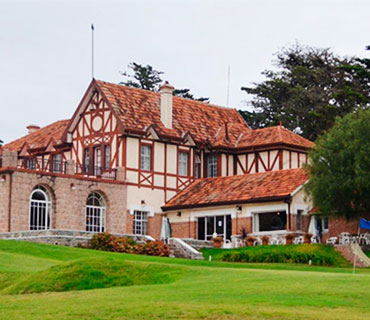 The La Cumbre Golf Club course has unbeatable landscape and technical conditions, making it a suitable field for the development of international level competitions

There are 18 holes and par 70 with a length of 5,463 m for men and 4,810 for women. It is located 1 km from the downtown area and is considered one of the most beautiful in our country. 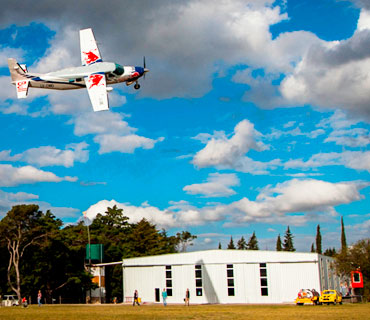 1250 meter long track. It is accessed by a paved road of 2 km indicated on National Route 38. It dates from the end of 1945 and has a consolidated track of 1250 meters in length. 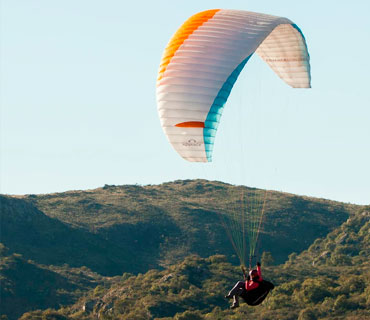 The continuation of Av. San Martín crossing National Route 38, is a gravel road that leads to Cuchi Corral, which is 8 km away and which means "Corral de chancho".

Al reaching a gate, the path opens to the right and ascends to the famous "Mirador" de Cuchi Corral, formerly a site of Indian prayers and today a launching pad for lovers of free flight. Here was held in 1999 a date of the Paragliding World Championship. 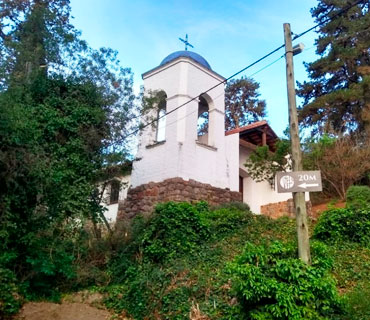 Chapel of the Santa Cruz

Its invocation is that of Our Lady of the Rosary.

It is located in Cruz Chica on the road starting at the Cabor hotel. It was inaugurated in 1949 and historians of religious colonial art highlight the value of the Jesus of Nazareth that is preserved inside. 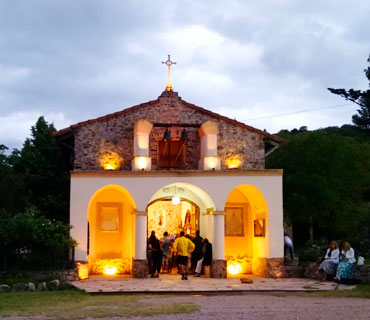 A few blocks from La Cumbre, along an easily accessible path, is the Chapel of San Roque.

A few blocks from the center of La Cumbre, on Monseñor Pablo Cabrera street, a road with easy access, is the Chapel of San Roque.

It is located at the foot of the "Cristo Redendtor" and is the oldest and most representative chapel of La Cumbre, it is distinguished by the simplicity of its construction and an environment that invites reflection. It is estimated that this chapel was freed for worship in 1898. It was possible to testify in the sacramental books kept in the archive of the Archbishopric of Córdoba in the section of the Parish of Punilla or Parish of Cosquín that inscriptions of baptisms, marriages and deaths were made in the Petrona de Olmos oratory in the 1880s. This oratory, which was the origin of the chapel, venerates the image of San Roque and preserves the remains of its founder. 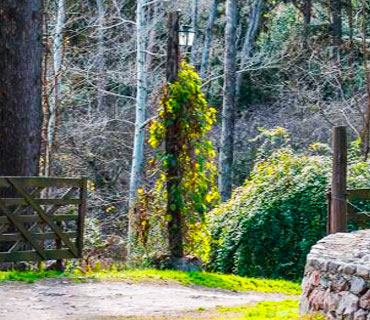 Walk through beautiful mountain landscapes, between splendid mansions and entertainment to enjoy an afternoon at any time of the year.

From the Plaza de La Cumbre (km 0), exit along the Provincial Road to the north, on the way you will pass in front of the La Cumbre Lawn Tennis Club to find the first of a series of trails that climb the mountains, inviting you to explore them.
At km 1.7, meters after Las Terrazas, a path turns right that leads to the Chapel of the Holy Cross and then to the water filters. Next to it there is a dirt road (General Alvear street), 300 m on this street you reach El Paraíso, where the famous writer Manuel Mujica Lainez lived. 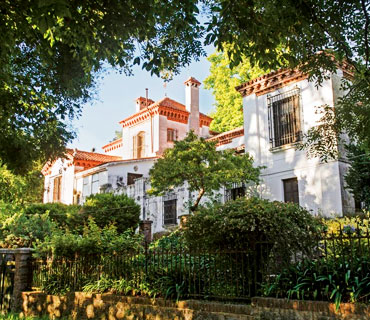 Since July 1987, the house of Manuel Mujica Lainez has been offered to visitors just as it was in the writer's life, thanks to the donation made by his wife, Ana de Alvear, of the property..

Inside it are accumulated the testimonies of a long permanence in the world, collected with grace and wisdom: the writer's personal belongings, among which are his hat, canes, monocle and the famous beetle ring.
Its furniture, works of art, such as paintings by Soldi, Victorica and Basaldáa, sculptures by Fioravanti, Juan Zorrilla de San Martín, Yrurtia and Paul Troubetzkoy, a magnificent library of some 15,000 volumes and the desk where the academic. 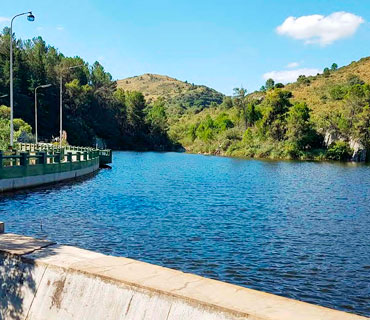 If from the Golf Club you take the road that leads to Ascochinga, Route E-66, you can reach the first arch dam built in South America: the San Jerónimo dam, 6 km from La Cumbre.. 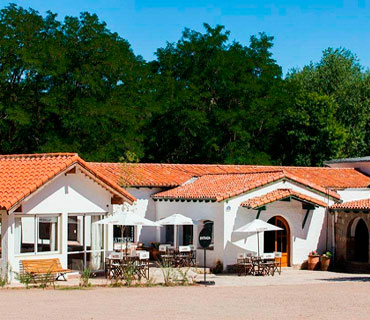 A Tourist Circuit, with a Cultural, Rural and Historical content.

Estancia EL ROSARIO located at 1325 meters. above sea level, one of the most traditional walks in the mountains of Córdoba.

Nestled in a place of incredible beauty, since 1924 the factory has handcrafted the most exquisite alfajores, sweets, candies, syrups , chocolates, preserves.
Estancia El Rosario, offers you a unique experience based on an excursion in the Establishment.
A Tourist Circuit, with a Cultural, Rural and Historical content, with a program that you will never forget. It takes place in the Complex and with a Trekking Circuit. 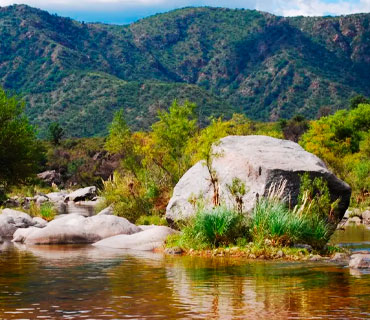 From La Cumbre to the west is the path down to the Pinto River.

From the center of La Cumbre, take Avda. San Martín (old access to the town) and its continuation by crossing route 38, which is the road to Valle del Pinto, following the trail traveled by hundreds of cyclists in the traditional race that It is disputed every year with the same name. Throughout the journey, 8 fords are crossed over the fresh waters of the mountain rivers.

The path down to the river has spectacular contours, enclosed between the slopes of the mountains populated by native species.
This landscape is one of the most beautiful in Córdoba and still preserves old native trees such as the orco quebracho, drinking molles, algarrobo and chañar.
A short walk away is the centenary cemetery of the area, and a little further on the Chapel of Pinto built by the pastor Justo Olmos in 1924. 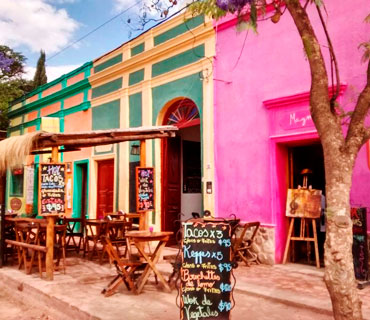 San Marcos is a place where aboriginal culture, mountain culture and protagonists of the Hippie movement converge..

The Pinto path runs through the Valley to the town of San Marcos Sierras, passing through the Quilpo River.
San Marcos is a place where aboriginal, mountain culture and protagonists of the Hippie movement converge, giving it its very particular style..
There it is possible to have lunch in a typical place of the town, then walk in its square, visit the church and the stalls that offer homemade sweets and honey, because the National Honey Festival is celebrated here. 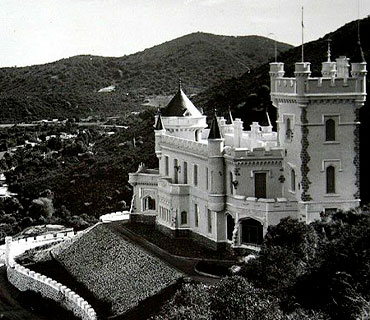 Architectural symbol of the Punilla Valley.

In 1930, a doctor named Bartolomé Vasallo built a lavish castle in La Cumbre that soon became an architectural symbol throughout Punilla.
Vasallo gave signs of his presence in the dwelling, raising a blue flag and used to ride with his wife through the streets of La Cumbre. He donated his castle to the Municipality but, in 1942, the onerous cost of maintenance made the municipality put it up for public auction.
If until then its particular physiognomy had turned it into a tourist attraction, its new owner, Fritz Mandl, added the features of his unusual personality to transform it into the center of permanent comments. 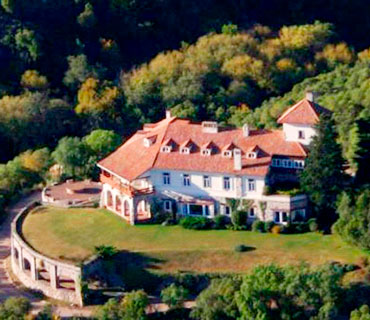 Architectural symbol of the Punilla Valley.

Mandl decided to completely reform its façade and began the work that would take almost two years. With plans brought from France, which included a toilet in the middle of the stables, the castle was unrecognizable and added to the mystery surrounding the European billionaire.
Mandl had inherited the powerful steel mills from his father, but as Austria was annexed to the empire of Hitler's German regime, the companies were expropriated. Mandl landed in Argentina in 1938 and soon added to his various farms and properties, the company that manufactured bicycles and later turned to the arms industry.
Mandl maintained a friendship with General Perón and most of the personalities then. To his stays at La Cumbre, he arrived accompanied by his second wife Herta de Mandl, assistants and a personal cook. Until 1950, the Prince of Staremberg and his father, the heir to the Austrian crown, stayed there. After the Second World War, Mandl stopped coming to La Cumbre. 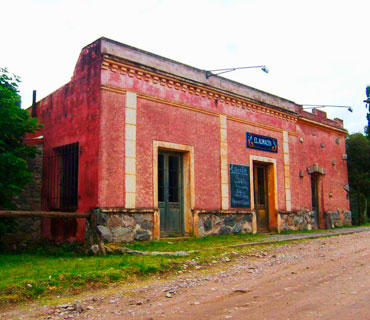 A consolidated gravel road, surrounded by beautiful landscapes, connects us with the town of Villa Giardino. The path that borders the Golf Club leads to the Valle del Pungo and La Punilla, which have mainly been chosen by artisans to display their creations. This has given it a characteristic and has turned it into a particularized circuit known as the "camino de los artesanos" (craftsmen's road). Route 38. 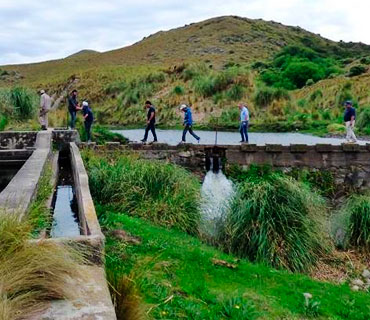 12 km east of La Cumbre, in the area of ​​Tiu Mayu; Practically on the border of the Punilla department is the re-education center for the howler monkey or caraya.
The same ones that in the Quechua language are called alouatta, that is to say, chief of the forest. And they are actually the bosses. Their howls awaken the ancient fear of the unknown, and place us in jungle places and tropical climates.
Equip yourself with your camera, and if you have binoculars, bring them too... Feel like in the jungle, but in the mountains from Córdoba and at 1325 meters. height.
The visit will be accompanied by specialized personnel from the reserve, who will provide information, guide observations and teach how to interpret the behaviors, sounds and movements of these primates.
Discover a project aimed at saving a Argentine species in extinction and venture to observe these animals in freedom. 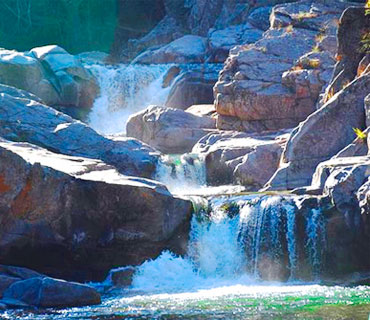 The E-66 gravel road that leads from La Cumbre to Ascochinga passing through Tíu Mayu and the Tres Cascadas, is one of the most beautiful in the Punilla Valley.
Ascochinga is about 45 km away, and from there, just 4 km away, is “La Paz”, the former estancia of Julio Argentino Roca.
16 km from Ascochinga, you can visit the Jesuit ranch of Santa Catalina. Even today the water used in the Santa Catalina region comes from the Sierra de Ongamira and arrives through underground pipes that the Jesuits built in stone in 1656. 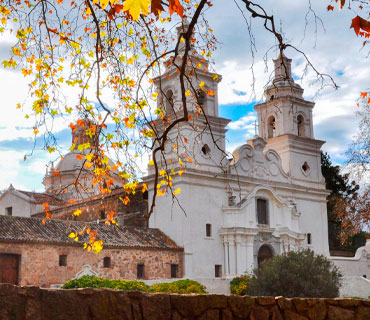 Since December 2000, it is a World Heritage Site. 16 km from Ascochinga along a consolidated road and passing through La Pampa and Coco Majada.
There is one of the most important Jesuit settlements in the province of Córdoba: Santa Catalina. The temple dates from approximately 1768 and has a Baroque façade.
The novitiate and the workshops and houses that were destined for the slaves and the Indians are also conserved. Inside, there is an old organ, several paintings of The Passion and original tables of what was the altarpiece of the main altar. 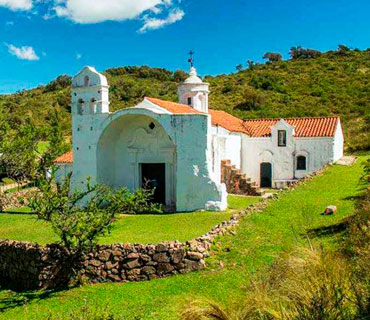 1730 - Our Lady of the Rosary of Candonga (Nuestra Señora del Rosario).

From Ascochinga and passing through La Granja (6 km.), Agua de Oro (6 km more) and El Manzano (another 3 km) we arrive at the Candonga chapel built around 1730.
Its name means "Tire Mule" and it was built under the name of Nuestra Señora del Rosario de Candonga within the possessions that José Moyano Oscáriz bought in 1720. He baptized these lands as Santa Gertrudis, planted vineyards and fruit trees and dedicated himself to fattening the mules that were later herded to Upper Peru to be used in the Potosí mines.
Candonga in architectural terms, is integrated into the landscape and it is noted that the interior decoration has had the hand of indigenous artisans.
In 1941 it was declared a National Historical Monument. 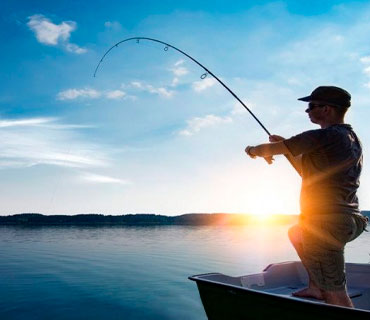 In artificial rivers and lakes.

This sport can be practiced in almost all rivers and artificial lakes in the mountain area. The predominant species is the pejerrey, although we also find carp, black catfish, perch, tarariras and toothfish. In mountain streams above 1,500 m.a.s.l. and in some reservoirs we can find trout. 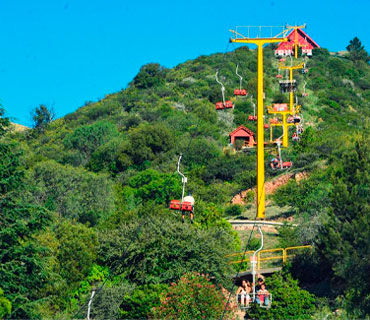 A small town whose inhabitants take extreme care of nature, has an excellent climate and aromatic plants abound. From the chapel of Santa Teresita you get an excellent view of the place.
It has a municipal pool. Visits to the El Descanso Recreational and Cultural Park, with sculptures, gardens, entertainment and confectionery, as well as the Telesilla Complex, with its slider equipped with modern sledges that can be controlled at will. You can also tour the San Francisco establishment, producer of exquisite raspberries that can be purchased prepared in various ways. 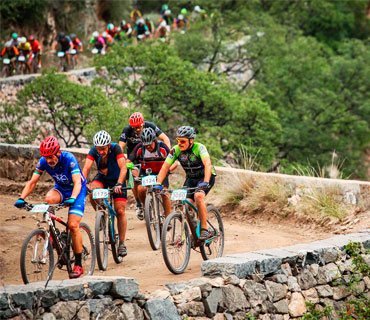